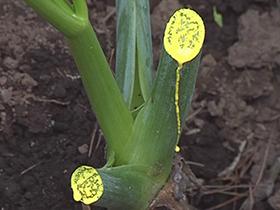 Valuable Yellow Polyphenol Components Uniquely Found in Ashitaba Valuable Yellow Polyphenol Components Uniquely Found in Ashitaba When the leaves and stems of Ashitaba are cut, viscous yellow sap comes out from the cut surface. This yellow sap is not found in any other Apiaceae plants, but found exclusively in Ashitaba. Only a few milligrams of this sap can be collected from one Ashitaba stem, which makes it very valuable. Ashitaba polyphenols are plentifully contained in this yellow sap and are called chalcones. Over 10 types of chalcones are confirmed to exist in the yellow sap. We are the first manufacturer in Japan which succeeded in powderising the Ashitaba polyphenols in 1999 and, consequently, introduced it as a new functional material. We have been studying its utility and functionality ever since.