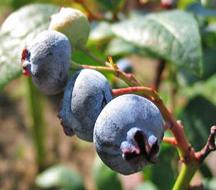 Bilberry P.E. Original Plant:Fruit of Vauniium macrocarpon L Specification:25%-40% Anthocyanidin Test Method：UV Molecular Formula：C27 H31 O16 Molecular Weight：611 CAS No.：84082-34-8 More Pharmacology Action: Bilberry is a perennial, ornamental shrub that is commonly found in various climates in damp woodlands and moorlands. In the United States they are known as huckleberries, and there are over 100 species with similar names and fruit throughout the Europe, Asia and North America. The English call them whortleberries. The Scots know them as blaeberries. Bilberry has been used as a medicinal herb since the 16th century. Bilberry is also used in connection with vascular and blood disorders and shows positive effects when treating varicose veins, thrombosis, and angina. Bilberry's fruit contains flavonoids and anthocyanin, which serve to prevent capillary fragility, thin the blood, and stimulate the release of vasodilators. Anthocyanin, the main ingredients are Pelargonidin、Peonidin、Petunidin、Malvidin、Delphindin、Cyanidin and so on. a natural antioxidant, also lowers blood pressure, reduces clotting and improves blood supply to the nervous system. Bilberry also contains glucoquinine that has the ability to lower blood sugar. Dried Bilberry fruit and Bilberry tea has been used as a treatment for diarrhea and as a relief for nausea and indigestion. Bilberry is also used as a treatment for mild inflammation of the mucous membranes of the mouth and thr