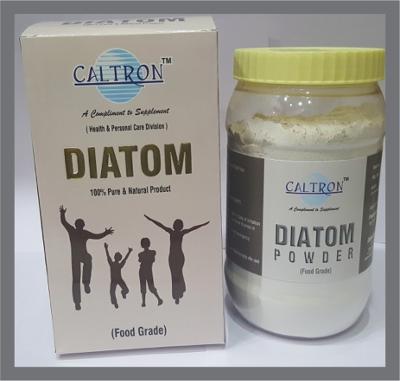 Caltron's “Diatom” Powder food grade is made from the fossilized remains of tiny, aquatic organisms called diatoms. Their skeletons were made of a natural substance called silica. Over a long period of time, diatoms accumulated in the sediment of rivers, streams, lakes, and oceans were known as Diatomaceous earth. “DIATOM,” powder is a natural substance that is actually created from the remains of diatoms, microscopic water plants that are like algae. It contains minerals such as silicon, calcium, sodium, and magnesium. “DIATOM” is made up of 99.9% Amorphous Silica.

Silica is a semi-conductive mineral which when warmed by body heat becomes negatively charged and gives off electrons. These negatively charged mineral ions and/or individual shells attract bad microbes, free radicals, positively charged waste and other harmful things. Many harmful things entering the body have a positive charge, acting as magnets, the negatively charged shells and/or ions attract and absorb positive things that are small enough to go through the holes and you can trap toxins into the porous food-grade DE particle which is then excreted safely out of the body. Because of the strong charge, each shell can absorb a large number of positively charged substances, whether they be chemical or in the form of bacteria or viruses. They pass on through the stomach and intestine, taking these harmful substances out of the body.