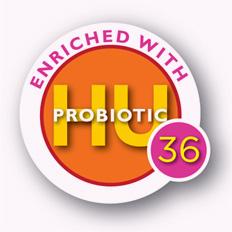 HU36™ hu-probioticColorspore Bacillus Indicus HU36 (Bacillus HU36™) – The first carotenoid rich probiotic strain offered to the dietary supplement market. An isolate from humans, Indicus HU36 produces high levels of powerful carotenoids (antioxidants) at the site of absorption. Carotenoids do not survive the gastric system well. HU36 however, has demonstrated the ability to survive past the stomach acid and produce the carotenoids at their site of absorption in the gut. The Bacillus HU36™ spores can survive the harsh conditions associated with food processing as well and may be incorporated into a range of food matrices without the need for refrigeration. This probiotic is also uniquely stable in liquids at room temperature and will remain dormant in non-refrigerated beverages. This makes the carotenoids produced by HU 36 the most bioavailable supplementary carotenoids in the marketplace.