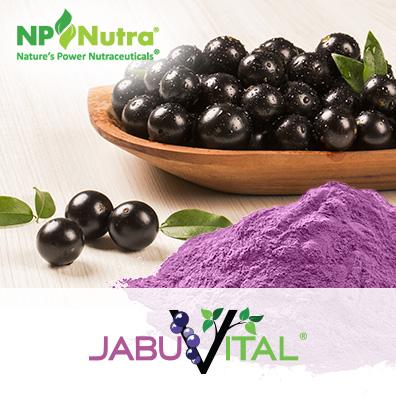 JabuVital® is a new and improved Jabuticaba juice powder from the fruit growing on the trunk of the Jabuticaba tree, otherwise known as “Brazilian Grape Tree”. Jabuticaba is a slow growing tree that is grown for the delicious purple, grape-like fruits it produces.

Jabuticaba has white flowers that grow directly from its trunk. The purplish black fruit is 3-4 cm in diameter and grows directly on the trunk and branches of the tree. This gives the fruiting Jabuticaba tree a distinctly exotic appearance. Jabuticaba’s deep purple skin covers a sweet translucent white to rosy pink flesh with a sub-acid tang.

Jabuticaba fruits are readily available in Brazilian markets where they are mainly eaten fresh. Because the fruit begin to ferment 3-4 days after harvest, fresh fruit is rarely available outside of growing areas. Jabuticaba’s striking color and delicate flavor impart unique qualities to jellies, ice creams and other desserts.

Jabuticaba makes a refreshing juice drink with a flavor that is compared to grape, blackcurrant, lychee, mangosteen and guava! The fruit is also appreciated for its exotic fragrance.

JabuVital® contains several potent antioxidant compounds which have been isolated from Jabuticaba fruit, including jaboticabin, a new depside unique to Jabuticaba. Jaboticabin is being studied for anti-aging applications. Jabuticaba is a good source of Vitamin C.

100 grams of the fruit contains 57% of the RDI. Jabuticaba peel is also considered a good source of fiber.*

Coconut Water has been a favorite beverage of Asian and Pacific cultures for thousands of years. The Hawaiians called it “noelani” which means “dew from the heavens”.

The name Jabuticaba, derived from the Tupi word Jabuti (tortoise) + Caba (place), meaning the place where you find tortoises.

Jabuticaba is one of Brazil’s favorite fruits. The tree grows very slowly, up to a maximum of 10m, but is only half a meter tall in the first few years. This makes the young Jabuticaba tree a popular bonsai plant. The peeling bark is pale brown with small white flowers growing in clusters directly from the trunk and branches. Within a month of flowering the fruit is formed. The fruit has a thick skin and contains a white translucent pulp comparable to that of grapes.