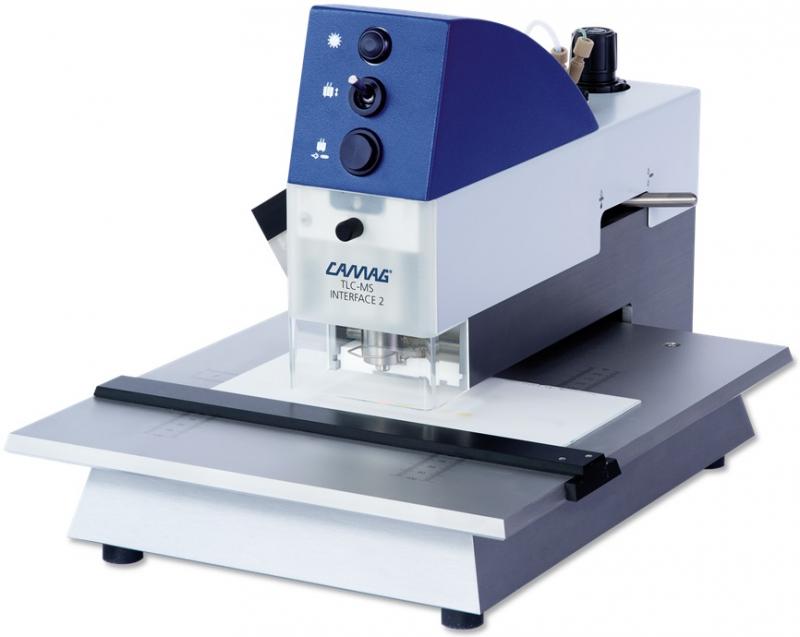 The TLC-MS Interface 2 enables users to directly analyze zones from TLC and HPTLC plates by Mass Spectrometry. A substance confirmation can be obtained in less than a minute.

The elution-based TLC-MS Interface 2 is a highly convenient and versatile instrument allowing for rapid and contamination-free elution of TLC/HPTLC zones with direct transfer to a mass spectrometer.

Through the pioneering concept of hyphenating High-Performance Thin-Layer Chromatography with Mass Spectrometry unequivocal substance identification is possible. The TLC-MS Interface 2 can be installed plug & play with any LC-MS system without adjustments or mass spectrometer modifications. Depending on the MS system, a substance can be identified within a minute via its mass spectrum, or for an unknown substance zone, the respective sum formula can be obtained. Furthermore, interesting zones can be eluted into vials for further investigations with, e.g., NMR, (ATR-)FTIR, ESI-MS, and MALDI-MS.

The chromatogram zones are eluted from the HPTLC plate with methanol or another suitable solvent with the flow speed appropriate for the LC-MS system. The round elution head is used for circular zones and the oval elution head for zones in the form of bands. After elution the eluate is either directly transferred to the mass spectrometer or collected in a sample vial for further offline analysis.

The TLC-MS Interface 2 features a modified elution head and an easily accessible, exchangeable filter, arranged in front of the valve. Cleaning is facilitated as compared to the previous version, making it highly efficient. By pushing a button, the elution path is cleaned of matrix particles with compressed air, increasing the lifetime of the filter and preventing the system from becoming blocked. These filters can be easily replaced without any modification to the elution head.

Plate positioning is significantly simplified: together with the positioning scale and the adjustable plate-stopper, the integrated crosshair laser enables accurate and reproducible positioning of the plate. Alternatively the coordinates determined by the TLC Visualizer 2 or the TLC Scanner 4 can be used to precisely position the HPTLC plate.